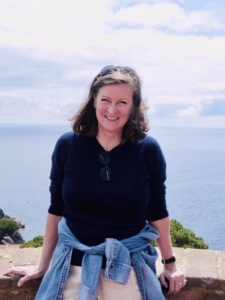 Why am I here

I’m working in the management of the Wolkenburg GmbH, a big event location for weddings, celebrations, business conferences and receptions since 15 years. Before that I was working as a journalist in the German television.

In October 2016 I heard for the first time about a “Muslim terrorist community” attacking and killing Burmese policemen in Rakhine State, Myanmar. It was said among Burmese civilians, including Burmese I knew, that all people belonging to this minority were “terrorists”. Right from the start it sounded totally ridiculous to me to state something silly like that and it made me curious how Burmese could believe and be so convinced of such nonsense. How in the world could children, women and old people all be “terrorists”???  That was the moment when my interest for the Rohingya people arose. I followed the news intensively about it and I couldn’t put together what exactly was happening there in this Burmese state Rakhine.

After August 2017 my awareness increased in total when the news were full of describing the exodus of 750.000 Rohingya who were fleeing murder and mass rape in their home country Myanmar by foot to Bangladesh. The following unjustified arrest of the two Burmese Reuters journalists Wa Lone and Kyaw Soe Oo who had owned sensitive material shown 10 Rohingya men being executed by Burmese military was reported in every western media and was probably the kick start for rousing and reaching a wider audience of people in the whole western world. This incident finally brought the Rohingya crisis to every news reading person and created a huge awareness about the decade long persecution of the Rohingya people. 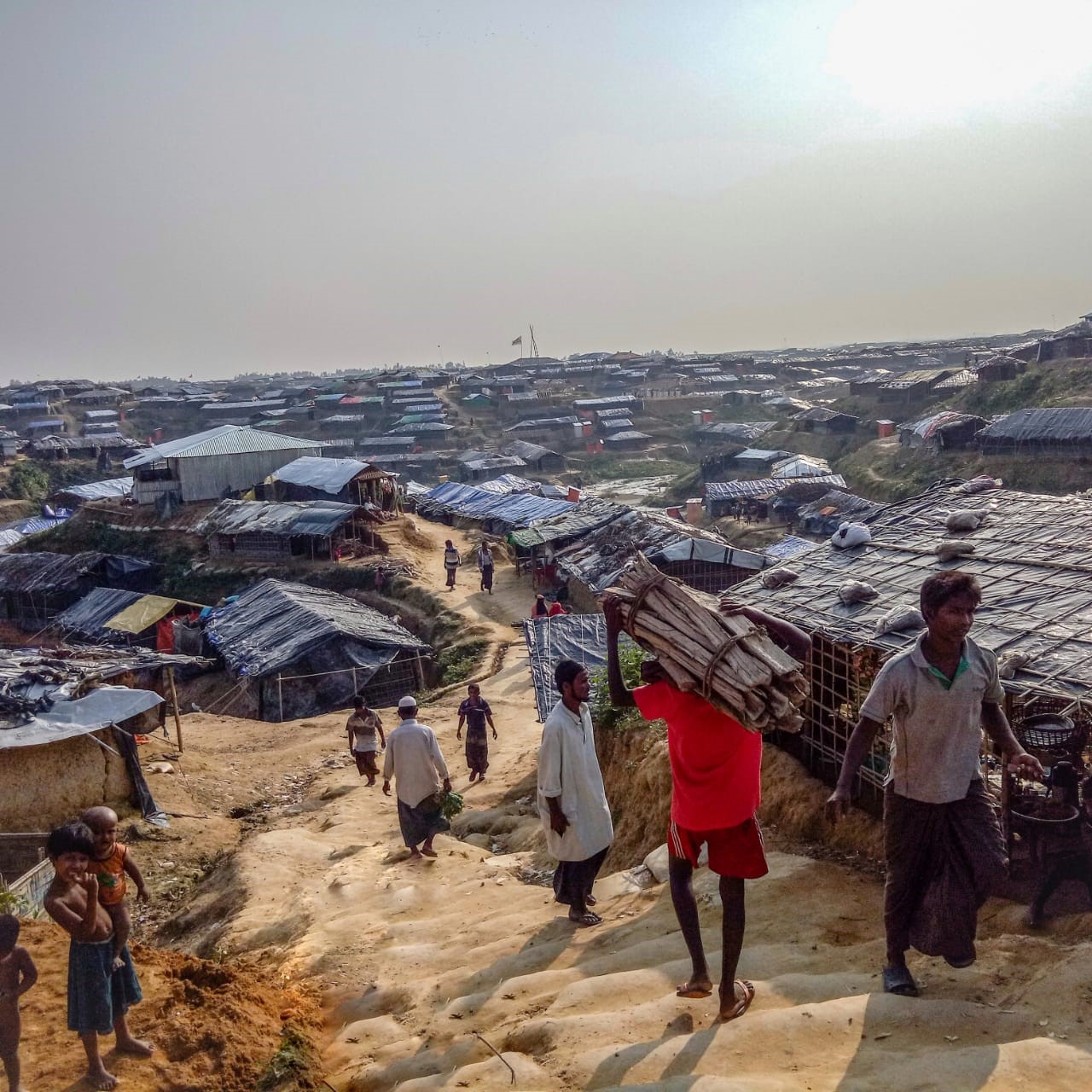 That’s when I couldn’t let go anymore of wanting to know all about this most persecuted minority in the world.

So I started to read everything I could about Myanmar and the Rohingya people, their history, their identity and their culture. During that time I will never forget reading two reports from Amnesty International* describing in detail the atrocities committed on the Rohingya by the Burmese army in August 2017 and the following weeks after, and also the autobiography “First they erased our name” by Habiburahman.*

These two reports and this book literally drove me out of my mind. In all these months reading and finding out about all this indescribable cruelty committed on the Rohingya it broke me to pieces inside and I was totally desperate many times. I was thinking day and night about this incredible injustice. I cried a lot. It just got me. I never had such an experience before in my life. I literally felt this suffering physically and mentally and I couldn’t control my tears wherever I was or whatever I was doing. My tears just rolled down my face, so many times in the middle of the street. I was thinking constantly: What in the world can I do??? There was no solution and this realization drove me totally insane.

In October 2019 I started to reach out to Rohingya people over Facebook friends requests. For many weeks I had long conversations with two young men – Imran in Malaysia and Azad in the Kutupalong refugee camp of Cox’s Bazar, Bangladesh. From them I learned so much more about the hardship and endurance of the Rohingya people. But also I learned about all this awesome creativity and artistic work existing there inside the refugee camps. I got aware of Rohingya photography, Rohingya poetry, Rohingya art, Rohingya crafts and Rohingya music. A real treasure and cosmos of different talents opened up to me. This culture cast a total spell on me and I was absolutely fascinated by it.

Then in March 2020 I got the lucky chance to help exactly this Azad and also the young Rohingya Rafique to stay in Europe. This was just a miracle. One chance in a million. I couldn’t believe my ears when Azad told me he would come to Geneva, together with Rafique, invited and flewn inside Switzerland by the UNHCR to speak in front of the United Nations about their hopes and dreams (just to be flewn back after “two days” into the refugee camps of Bangladesh again). When they told me that the UNHCR would not help them to ask for asylum I was determined to make that possible and assured them my uncompromising help and support. I went to Geneva and got them out. Just like that.

Helping two Rohingya stays the biggest adventure and greatest achievement of my life.

The news of their no return to the refugee camps got around as fast as a bush fire and within little time the vast majority of Rohingya knew about these two guys who had managed to stay in Europe by the help of this German woman. 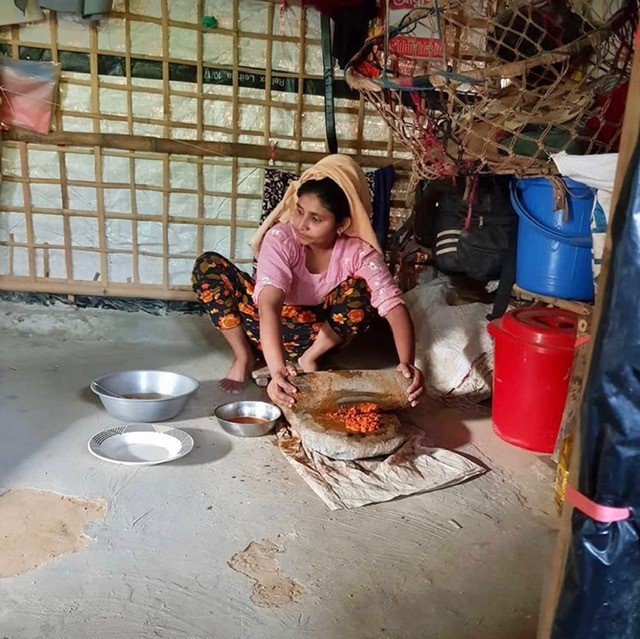 That was in March 2020. Since then I got innumerable friend requests on Facebook from Rohingya people and I’m very proud to call many of them my friends now. I enjoy it tremendously to get to know the Rohingya culture first hand and I feel extremely honored that so many Rohingya trust me and allow me to have so much insight into their lives. Being so close to this community I’m exposed to indescribable tragedy, suffering, sadness and despair. Many young Rohingya found valves for themselves to express their injured state of mind through art. And while doing this they manage many times simultanously to show also the beauty that defines this community so much aswell. It’s breathtaking to discover this in all their artistic work and it makes me speechless every day anew.

Today I’m incredibly grateful to show some of this amazing and powerful work here on my page.

I want to thank all my Rohingya friends for accepting me, for trusting me and for allowing me here to show their great contributions and remarkable art.

The journey goes on. I will continue to fight for the rights of all Rohingya people and to show the injustice happening to them right this moment to the world. As long as I live I am committed to this engagement and to share my solidarity. My wish for life is to be able to see all Rohingya going home to Arakan with full human rights and legal status as recognized citizens of Myanmar.

Last but not least I want to especially thank my good friend and the best graphic designer Qudama Rafiq who not only secured this domain for me but surprised me in total by telling me that it’s mine.

Special thanks also go out to my daughter Paula and to Rafique who I call my son now. They both encouraged me continuesly for fulfilling this project and provided me with very valuable input the whole time.

And of course I will be forever thankful to the awesome webdesigner and true friend Patrick Schmitz who showed endless patience teaching me WordPress, the program to put this page up and who helped me over many weeks to make it look nice.

You can also listen to my story on the awesome ah nah podcast, conversations with Myanmar, 6th of Sept. 2021