Many of my Rohingya friends tell me each day how humiliating it is for them to be denied of this important right for information. Each night especially the young people walk often for an hour to reach some smaller hills where the access is sometimes going up from 2G to 3G. 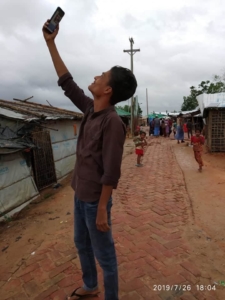 Rafique trying to get internet reception.

They hunger for news, any news, doesn’t matter if it’s political updates, sports results or to just chat with remaining family members in Rakhine or anywhere else stranded in this world.

Rafique told me when arriving by foot by the middle of October 2017 with his mother and siblings in the Kutupalong refugee camps he possessed a mobile. Entering Bangladesh his SIM card was logically not working anymore. After one week being in the camps he was able to buy a new one on the market there. At that time every refugee had internet access with 4G and the reception was always very good. People could check on the international news, connecting on social media and get in touch with friends and family. Until September 2019 everything was working properly. Then by the end of August came the first official announcements from the Bangladesh authorities that the internet access would be cut down to 2G anytime soon. They explained the drastic measurement by being forced to do this to be able to control the increasing criminal activities like drug dealing and human trafficking inside the camps more. In reality this was just a made up argument for justifying this unrectified intent and it was obvious to everyone that it was done only to punish the Rohingya and to keep them from reporting to the outer world about the horrendous conditions inside the camps. Another reason was the fear of too much mobilization due to a lot of demonstrations being held on 25th August, the second Memorial Day of the Rohingya Genocide.

For many days Rafique thought that this restriction would only last for some short period of time. He was sure like so many others that the Internet would eventually come back. Every morning when he woke up first thing he checked was his mobile to see if there was any connection. He looked at it every hour in hope it would come back. He and all the others did this for many, many days. And every night when he went to sleep he had to accept the fact that another day had passed finding out that the Internet was not available anymore.

The Internet is blocked now since over one year. It works in some areas of the camps a little better than in other places. Especially at night this is the case. That´s when the youths become active and meet on the hills already known for a higher reception.

Having no access to the internet is the destruction of communication. With being denied to talk with friends and family, of having access to valid information and also the possibility to study online it’s taking away people’s desire for reaching out, to get knowledge and to be part of this big world. Taking away the internet is and stays a violation of a human right and of the human dignity. Rohingya simply have to live with it – just another injustice and discrimination. Oct. 2021

When medical treatment is luxury… 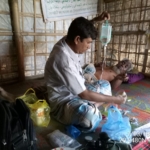 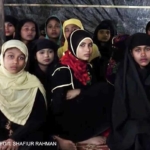 Testimony Tailors: “No need to hide our faces”
Scroll to top