For all of us in this world water is the most precious natural resource we have. Water is part of our life and to have access to it is vital for us every day. The whole subject “water” gets a total new meaning though inside the Rohingya refugee camps of Bangladesh where over one million people have to be able to get it also each day. To me the questions came up: How does this work there? How is it organized that all people have access to water? And how does this work for every Rohingya in their daily life? 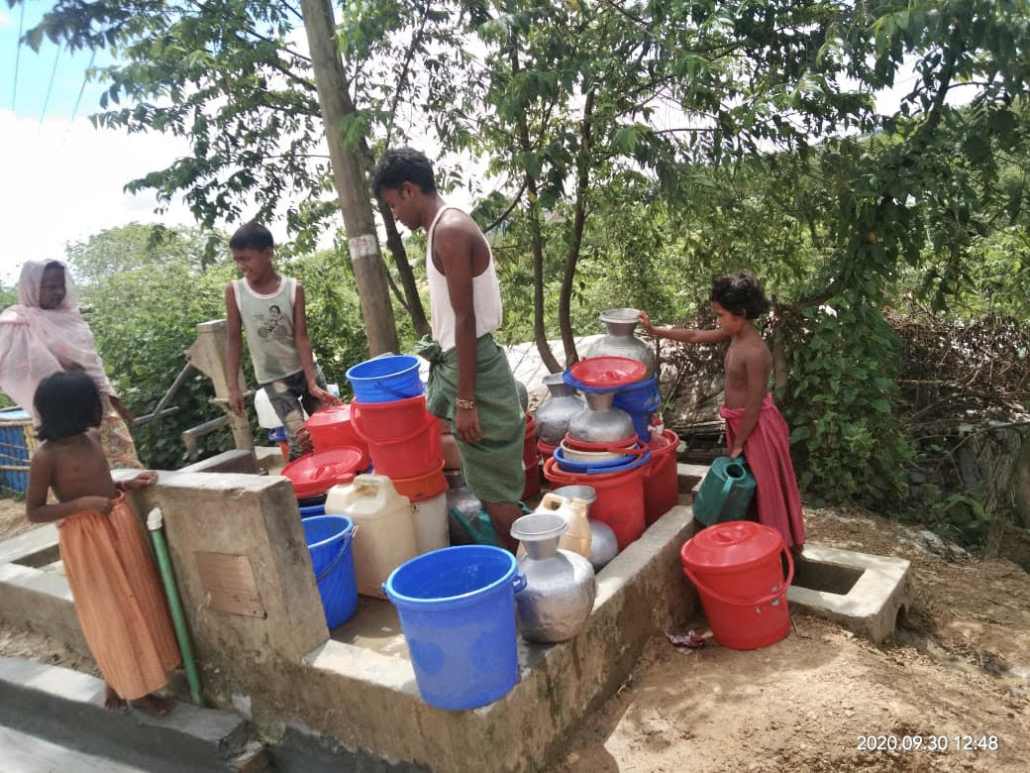 Rohingya refugees getting their daily ration of fresh water from a well, photo credit Mohammed Ederis

So I asked Rafique about this since he had lived in the Kutupalong refugee camps for 2 ½ years. He says that getting fresh water is always a struggle. Nevertheless the whole system of contributing water works in some camps better than in others. There are the old camps called “registered camps” which already exist since the beginning of the 90’s when already ten thousands of Rohingya were forced to flee their homes to Bangladesh. In these camps the conditions are a little better than in others, water pipelines run through the camps and the people have access to natural wells. 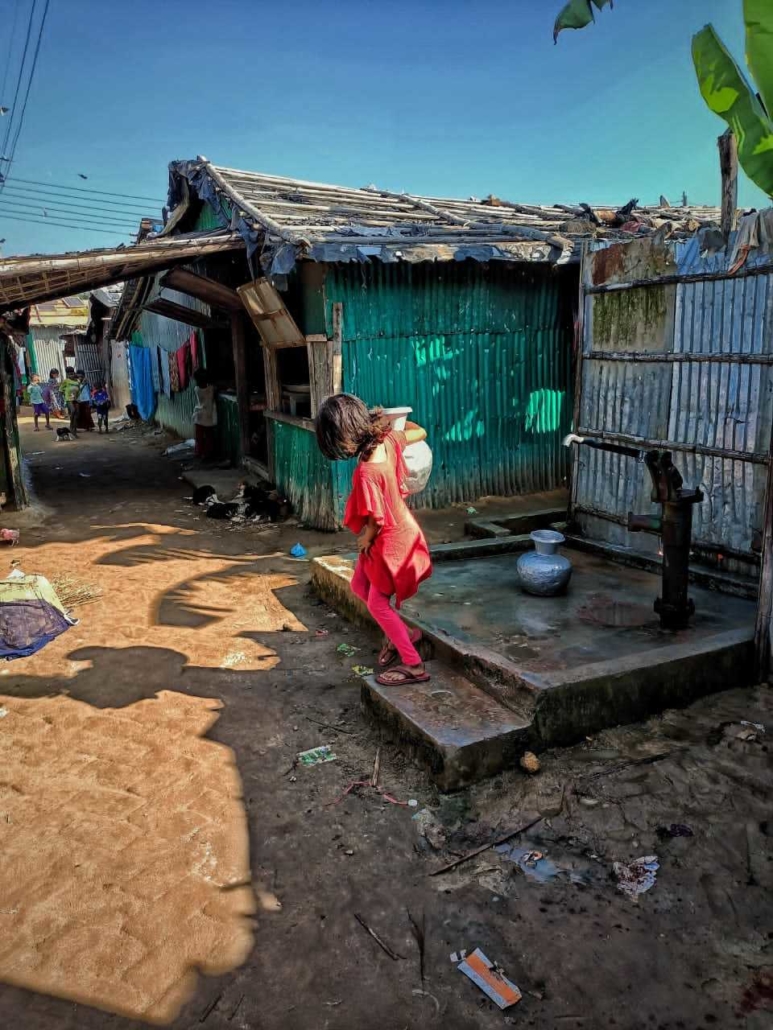 And then there are the “new camps” that were built in the hills after the new Rohingya influx in August 2017. Hundreds of shelters had to be built quickly and there was no water access anywhere. Very often the attempts to find fresh water failed, no matter how deep the drillings went into the ground. There were areas as well where NGOs were not present or less active with helping to improve the water situation. Until 2018 also often the water that was found was not drinkable because it was either too sour, too salty or too dirty. 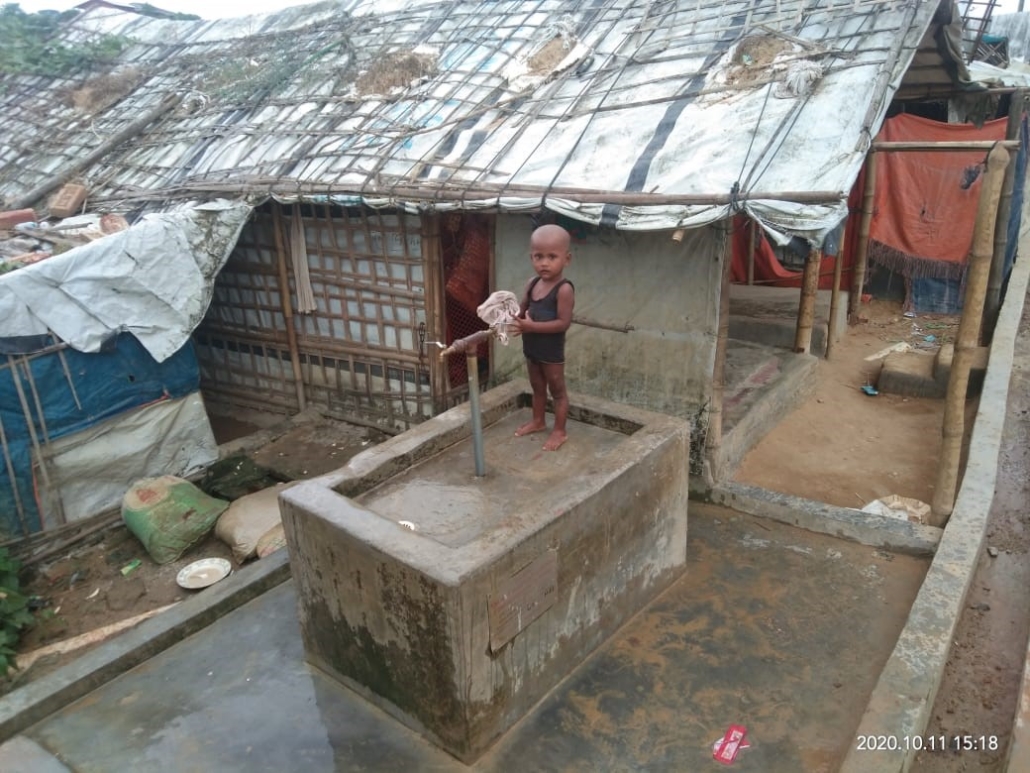 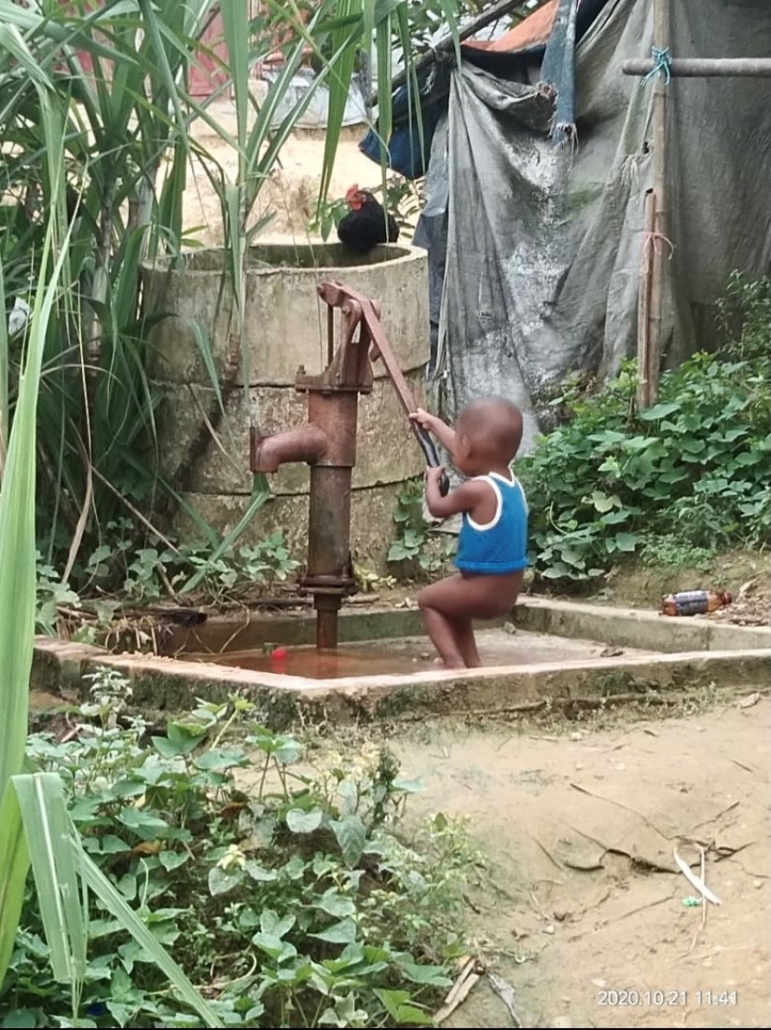 In these camps the refugees, mostly women and girls, had to walk twice a day very far, sometimes more than 1000 meters, to reach a well with a handle pump, to wait in line, to fill up their 12-liter water carafe and to carry this heavy load back home. This water comes from 200 m depth, sometimes even deeper, is drinking water and is also used for cooking and washing. Until today mostly women and girls have to accomplish this hard work and especially for old people, pregnant women and children it’s a daily ordeal to carry this water up the hills to get back to their shelters.

Canisters and buckets waiting in line to be filled with the daily ration of fresh water, photo credit Mohammeed Ederis 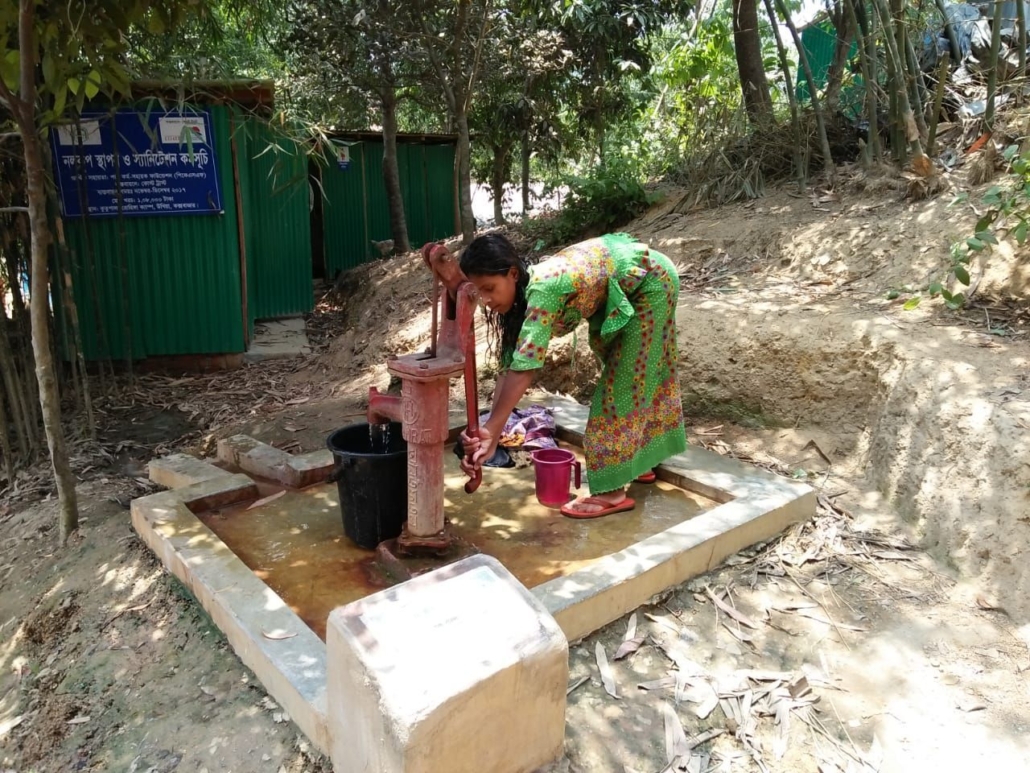 A young Rohingya girl taking water from a well with handle pump for their daily usage, photo credit Abul Kalam 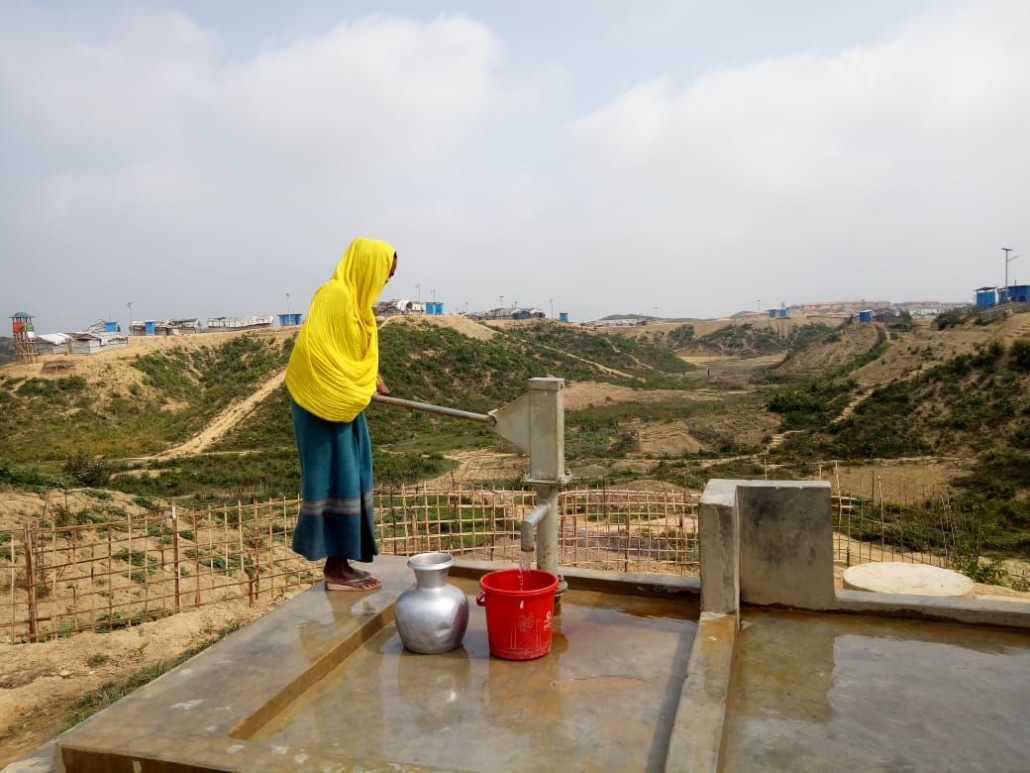 A Rohingya woman is getting fresh water from a well, photo credit Mohammed Idris

In the beginning of 2019 many NGOs started to install very big water tanks and to build water pipelines going from block to block. People are able to get fresh water there now for five hours in the morning and then again five hours in the evening. In the meantime the water has to be locked because children always love to play with it and waste this valuable resource simply too much. The water that is provided from these tabs is added with chlorine to keep it clean. Today people are more and more in favor to get their water from these increasing installated tabs because it is so much more convenient. 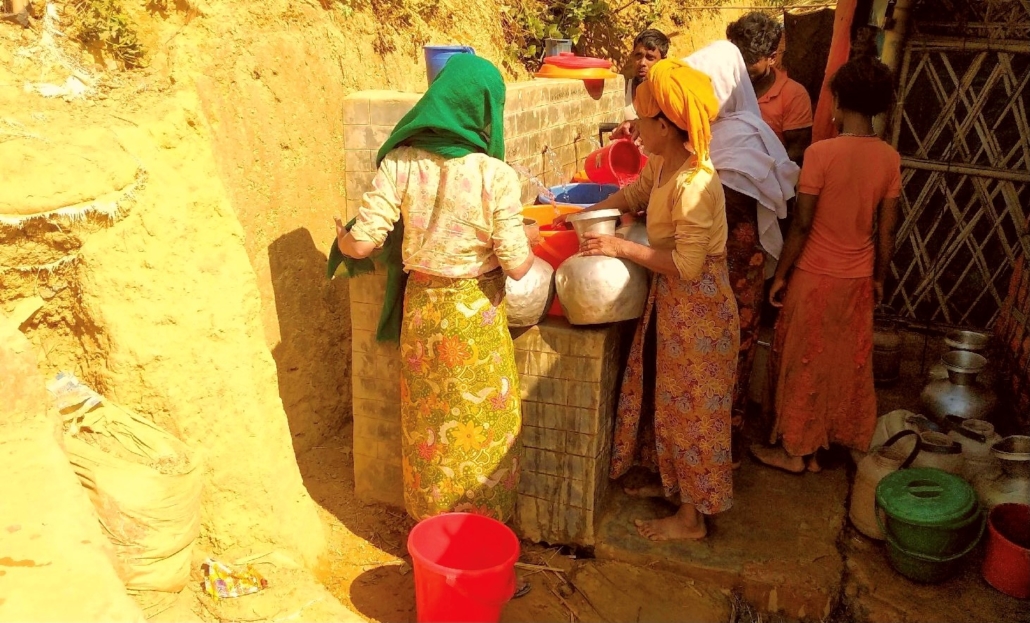 After long time with no access to water these Rohingya finally got a tab station, photo credit Mayyu Akter Hussain 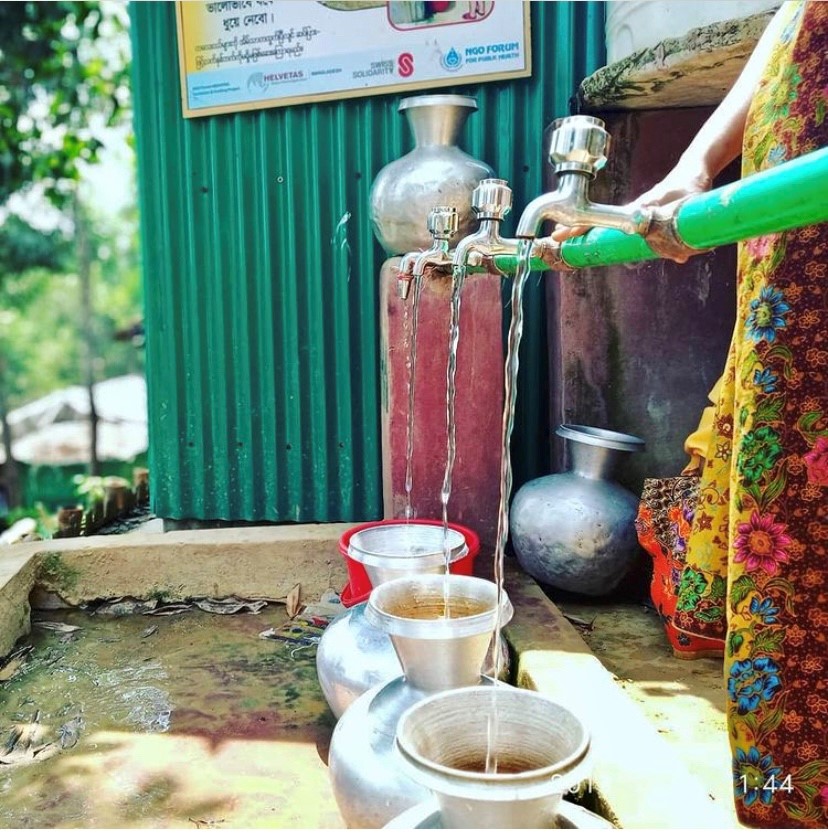 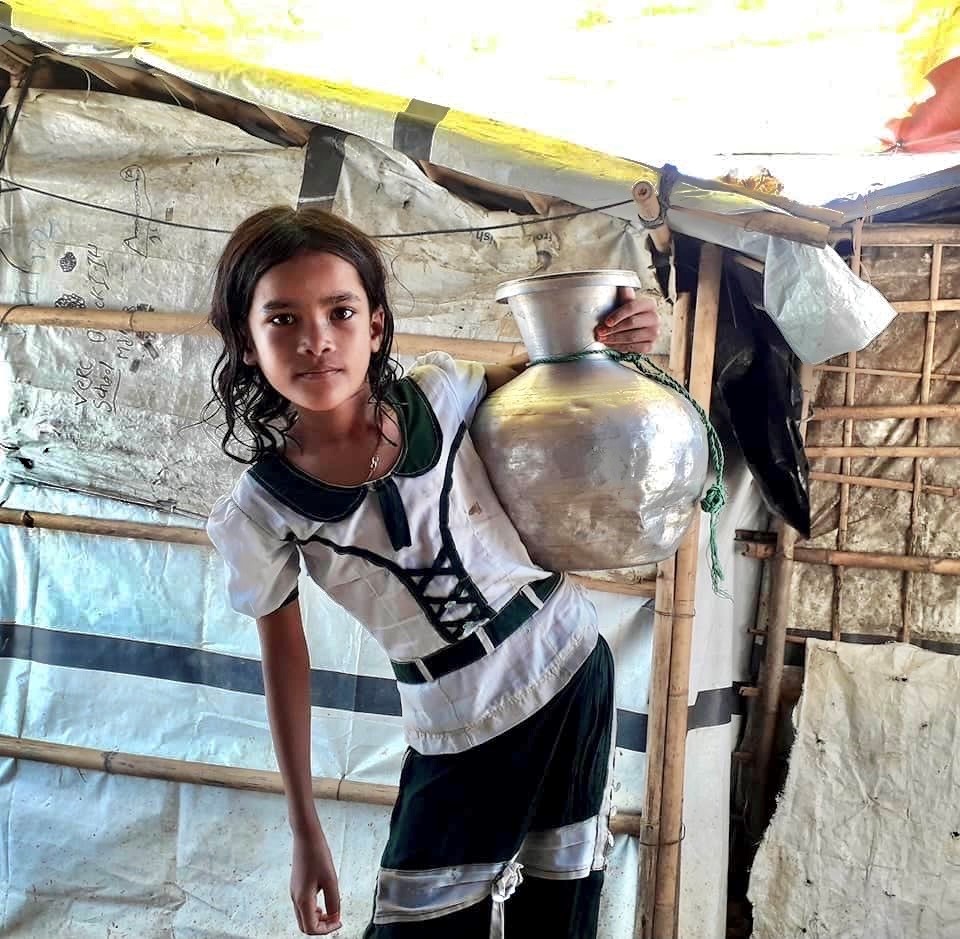 In some camps though there is still very little access to water until today. For many, many people it’s a daily hard struggle to get it. Some NGOs already installed some pipelines there but it’s just never enough for all the refugees who are living there. 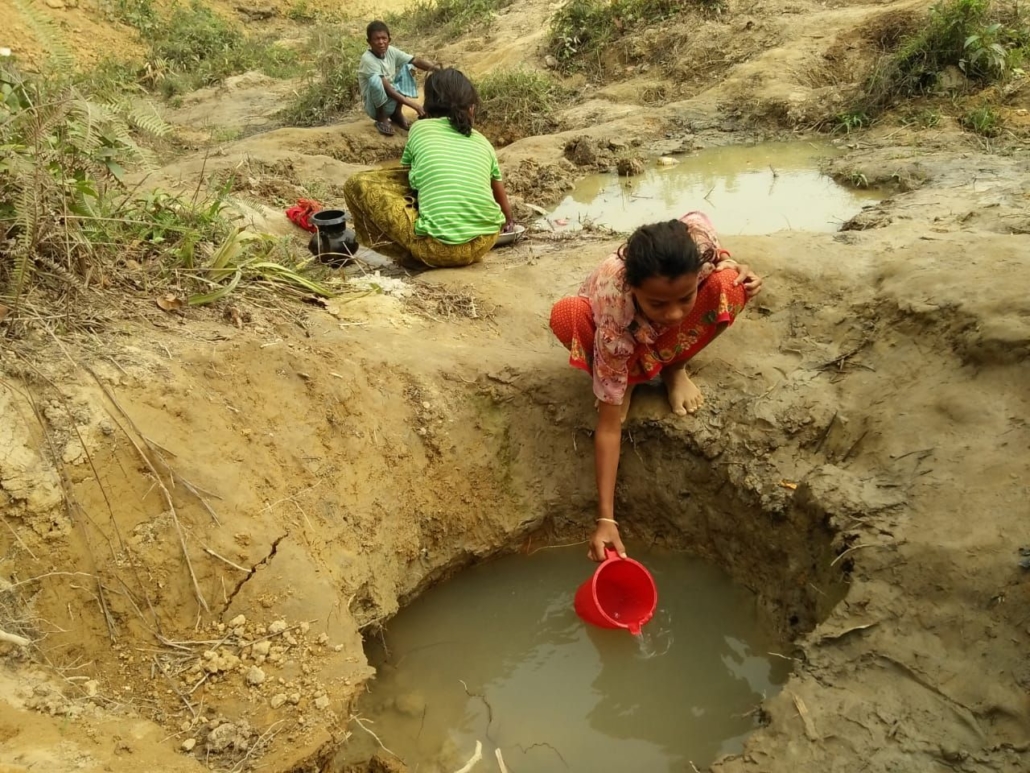 A Rohingya girl getting water out of a hole, photo credit Mohammed Idris 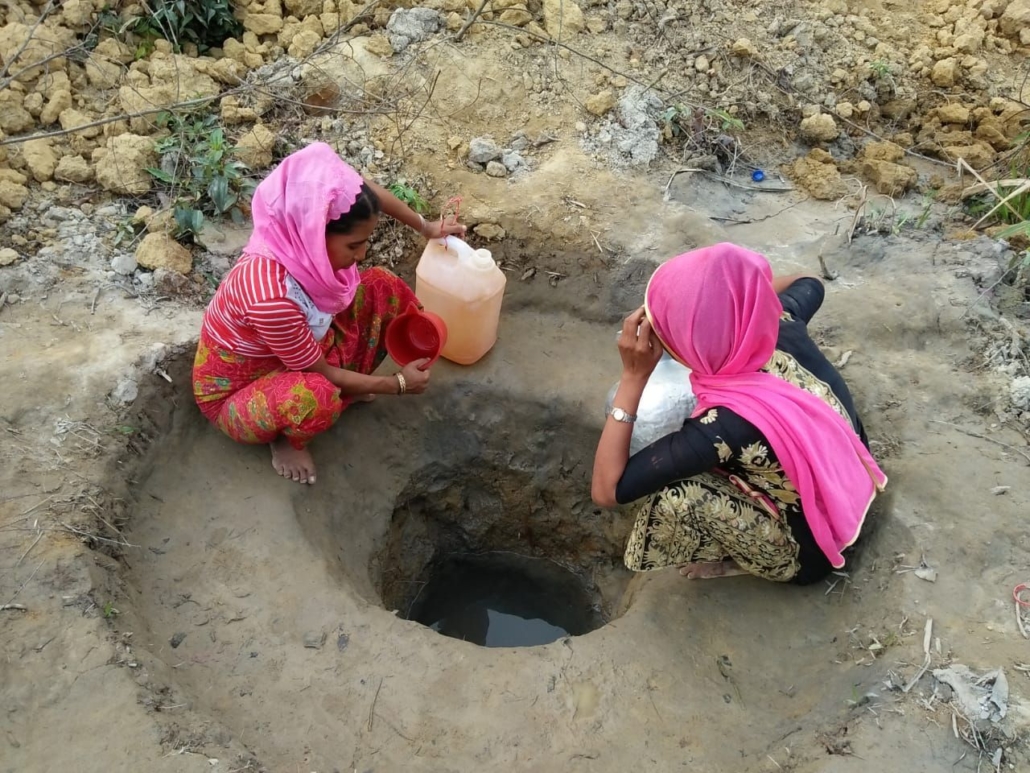 Two women getting water out of a hole, photo credit Mohammed Idris

So to have any water it’s an extreme task to accomplish every day. In some areas people built small dams and in these resulting ponds they can at least wash their clothes. For cooking or drinking though it is not good enough and it needs to be recycled by boiling it before it can be used. 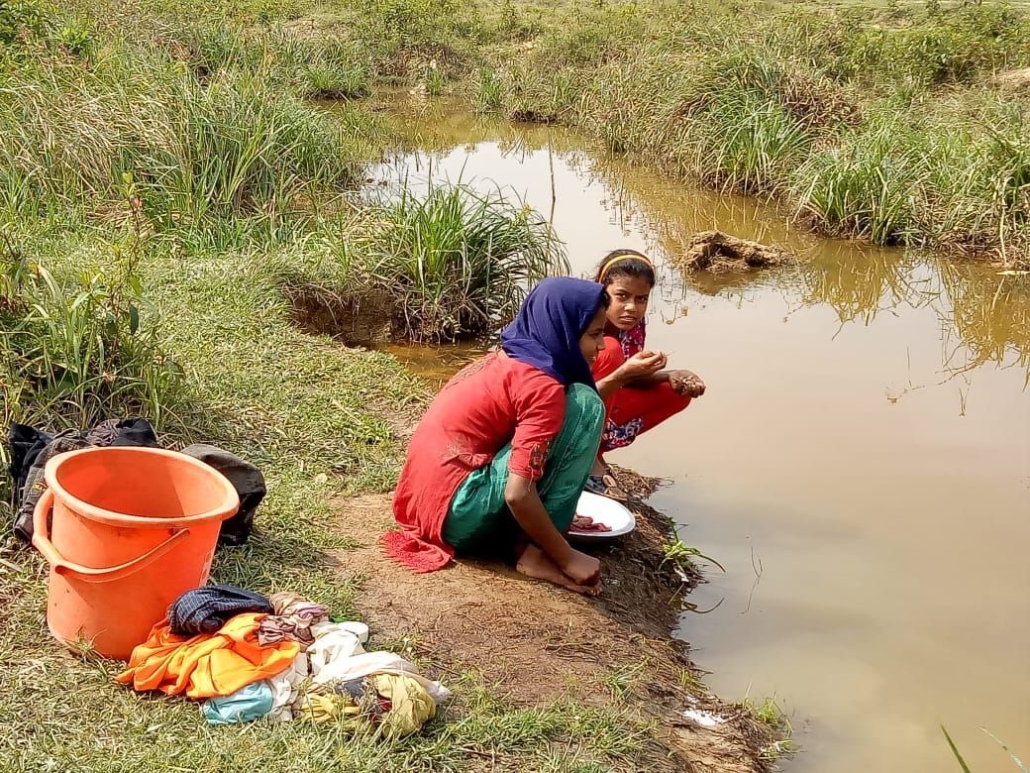 Some Rohingya are living so remote and far away from any clean water access that they are forced to drink even dirty water. They boil it and then drink it. They don’t have any other choice.

Rafique and his family were a little more fortunate than many others. In the Kutupalong camps where he lived, and also in the Balukhali camps, there are several wells all around. Near to his shelter his family is even able to pump up the water with the help of a generator.

“We drink, we cook, we wash our clothes and we take showers with this water.”

The sewage of every household is going into a system of small canals which are running throughout the camps. This drainage is open and the dirty water finally goes off into the rivers around. Also the ground absorbs this water a lot.

“We try to maintain these canals clean which is not always easy since many people throw their trash inside, a lot of plastic also. In the rainy season this gets even more complicated since the canals get blocked many times with incoming mud and leaves.” 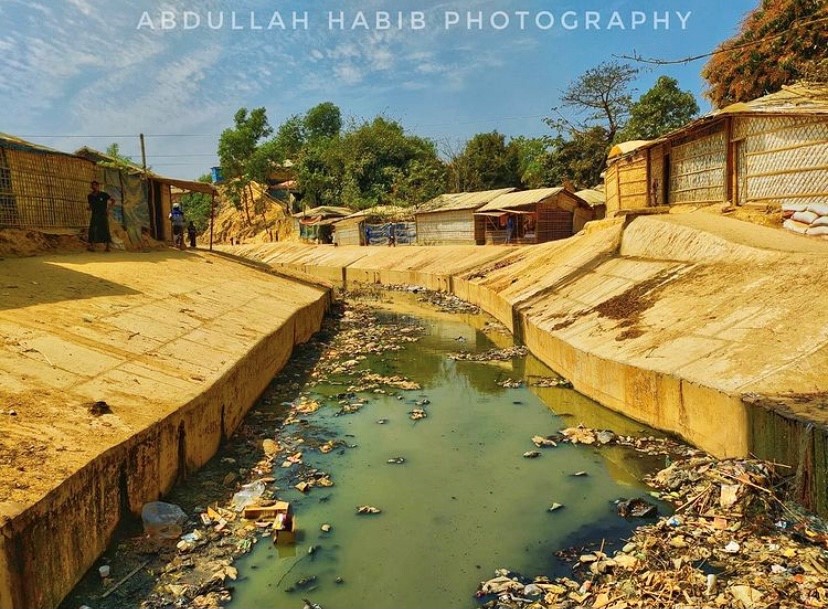 Depending on the neighbourhood the cleaning is organized by the Rohingya themselves. In other areas NGOs come regularly to free these canals from the accumulating dirt. When this does not happen regularly these canals become a breeding ground for flies and mosquitos and people around it get virus infections and diseases often.

In all of the camps there are also latrines positioned. Up to hundred people have to share one latrine. Getting up in the morning means for most Rohingya to walk far, around 100 m, before reaching one latrine, to stand in line with ten people in front waiting until it’s their turn and then to be finally able to relief themselves. Everyone brings his own water there which runs into septic tanks after. Every month these septic tanks get cleaned out by the help of NGOs.

In some areas though this is not organized well because NGO’s have left or no one feels responsible to take care of this. These latrines are in disastrous conditions. The challenges to make this work better for all Rohingya simply never become less or any easier and it will probably never be satisfactory by any means. To top this hardship it even gets more horrendous during the monsoon season when large parts of the camps are flooded many times and the mud and dirt gets everywhere, also inside hundreds of shelters that are only built by bamboo and plastic.

Like with all privations and limitations Rohingya have to adjust to and to live with inside these camps, they manage also to deal with this undignified water situation. Since decades it’s a daily fight to somehow survive, to persevere and to continue to exist.

The importance of soccer to the Rohingya 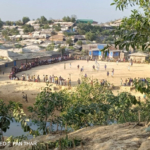 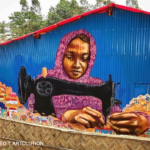